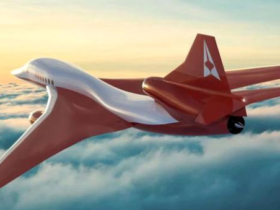 Supersonic aircraft manufacturer Aerion is closing. It will not honor the $ 11 billion orders

Oppo X 2021 will be the first smartphone with a roll-up screen from the Chinese manufacturer, but not the only device of this type.

Oppo X 2021 has a minimalist design, very similar to conventional smartphone products. Basically, this is where the “power” of the new product comes from: it looks like an ordinary smartphone, but it is not and you can see this from a very early age.

Unlike foldable phones, those with a roll-up screen are not forced to use a form of housing substantially different from what we have encountered so far, possibly impractical. Instead, when choosing a mobile phone we get a device that looks and works exactly as we would expect, most of the time. The difference is that at the push of a button, the screen area increases dramatically, the phone becoming a real compact tablet.

Confirming expectations, an unofficial video presentation shows the new product in all its “simplicity”. Basically, you don’t need too much inventiveness on the software side, the Android interface effortlessly adjusting to the new screen size. We can assume that most Android applications have the same transition, since the conventional rectangular screen shape and its orientation is never changed.

According to the company, the new Oppo X 2021 will be launched sometime later this year, without giving an exact delivery time. Although the prototype exists and is functional, it seems that the Chinese manufacturer will first have to test the market to see if there is interest and demand for such a device before it goes into production. This strategy seems to be completely different from what companies like Samsung, Huawei and Motorola do, which have launched foldable phones, later assessing whether the demand for them actually exists.

Demonstrated in a new hands-on video, Oppo X 2021 appears with a screen that can transition between the 6.7 and 7.4 inch diagonal. If the difference seems small, well, it really is. The manufacturer seems to have limited its ambitions so as not to encounter too many difficulties in terms of software or hardware scaling. In the end, the Android interpretation called ColorOS has no problem running on the new device, which confirms the manufacturer’s claims that it can launch the new smartphone at any time.

What is certain is that other rolling phones are ready for competition, TCL, LG and Samsung being just some of the speculated names. Inevitably, mobile phones will have their own niche, along with that of foldable phones. Which of these will ultimately be successful remains to be seen.