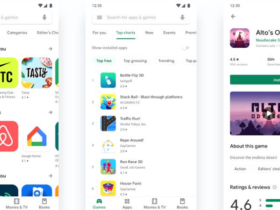 Google is cleaning up the Play Store: changing the rules for publishing apps

Xiaomi Mi 11 is already in the offers of stores in Romania, but it will not remain the most powerful Xiaomi phone for a long time, the Mi 11 Pro and Mi 11 Ultra versions will be launched before the end of this month.

According to the invitation distributed by Xiaomi itself, Mi 11 Pro and Mi 11 Ultra will be launched simultaneously for China and global markets, on March 29. Both models will have curved screens with appreciable dimensions. The XiaomiMegaLaunch hashtag event would also host the launch of the low-cost version, Mi 11 Lite.

According to rumors so far, Xiaomi Mi 11 Pro comes with 6.8-inch Quad HD + AMOLED screen, capable of using a refresh rate of 120Hz. In addition, mobile gaming enthusiasts receive a touch interface with a sampling rate of 480Hz, fast enough to eliminate any noticeable latencies when applying touch commands.

Further based on the Snapdragon 888 chipset, the configuration will be augmented with an almost absurd amount of 16GB LPDDR5 RAM and 512GB internal storage, with UFS 3.1 format.

The photo skills are given by the main camera based on the Samsung ISOCELL GN2 sensor (second generation), with 50MP resolution. Extended horizontally, the camera trim houses two other sensors of 48MP each, one coupled with ultra-wide lenses and the second with periscope lenses, offering zoom up to 120X. The generous space allocated on the back of the phone does not only belong to the cameras, spy photos obtained with a prototype copy indicating the presence of a miniature secondary screen. Its purpose could be to frame the photos obtained in portrait mode, which does not eliminate the need for a front camera.

Although it could receive improvements, the front camera seems to keep the same 20MP sensor found on the Mi 10 Ultra.

The list of essential features also includes a 5000mAh battery, which has increasingly become a standard feature in the flagship range. The difference is that the Mi 11 Ultra will be able to be charged at 67W via USB-C cable and 50W in wireless mode. Bonus, the phone can also be used to charge other devices, up to a power of 10W transmitted wirelessly.